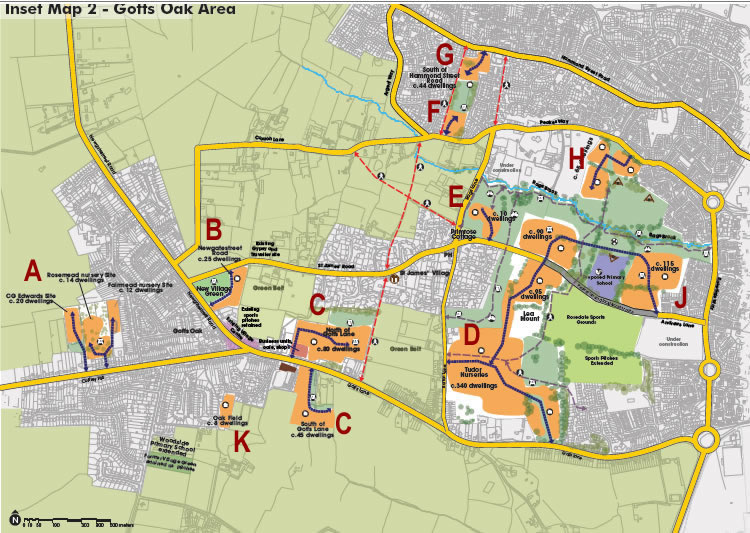 From the above map, the various areas for the proposed developments in Goffs Oak can be seen.  To date, it is only the C.E. Edwards site (Part of A) and the first stage of the Tudor Nurseries site coming on and off Goffs Lane (Part of D) that has gone through the first stage of obtaining planning permission from Broxbourne Council and signed off by the Secretary of State, which is subject to the proposed Local Plan being signed off.

On the 16th October, 2018 a number GOCA members attended the Independent review Hearing Session at Broxbourne Council house.  This review of the proposed Local Plan focused on Goffs Oak and the proposed Rosedale Park.  There were many key people on the panel discussing various issues relating to Goffs Oak.  GOCA had a locally known spokesperson, a GOCA member, along with Committee Members to act as a voice for GOCA, very much bringing some of the concerns identified at the AGM in May.

One GOCA member from the public gallery gave some very positive feedback to thank GOCA for securing a place to represent GOCA Members.  A quote:- ‘for speaking up for Goffs Oak so eloquently and to the key points at Tuesday’s Local Plan hearing.  In particular highlighting the underhand way the Council has tried, by faulty presentation, to play down the number of proposed new buildings in Goffs Oak. Steve Baker from CPRE Herts made another crucial point that the roposed”Rosedale Park”(!) would finally link Goffs Oak to the London sprawl.  At least thanks to GOCA the residents of Goffs Oak had a proper voice and nothing more can be done.’

But the story does not stop there.  If you would like to learn more about how the proposed Local Plan is being scrutinised by the Independent review, the last of the Hearing Sessions are taking place on Tuesday 6th and Wednesday 7th November.  Why don’t you try and come along to the public gallery.  If you come early, hot drinks are available.  On Tuesday, the morning session starting at 930am covers Gypsies, Travellers and Showpeople accommodation and in the afternoon Housing Development.  The afternoon session starts at 2pm covers housing mix and affordable housing.  GOCA has been keeping a good eye on this sort of housing, so will have representation on the panel as keen to ensure adequate provision for Senior Living and older people.  This includes  downsizing and why not to a sizable luxury apartment with good access to local facilities.

On Wednesday 9th November at 0930, other development matters are on the agenda with Historic England, Herts and Middlesex Wildlifwe Trust and Natural England being  on the panel.  In the afternoon, the infrastructure including Transport, Water, and other matters are on the agenda.  GOCA will have representation and be on the panel.  The B156 is a real concern for many of our members.  This is a good session to come to showing support.

This site uses Akismet to reduce spam. Learn how your comment data is processed.

We want to hear from you